Album
Read More
“Upside Down,” the latest 13-track album penned by Todd Underwood, is a personal diary of his 2020, dazzled in the cusps and pits, between the most extreme yin and yang of a year so awful and unexpected that he never wants to repeat.

Suspended somewhere in angelic auras and infernal flames, veteran Todd Underwood returns to the scene with an album imbued with resilience to the spine.

With almost 40 years spent on the scene, with influences that without ambition call in The Police, Kings X, and Saosin, Underwood sports an adamantine temper.

Behind him, there are countless releases, including around 30 albums, recorded with various bands and solo acts, spread over 35 years or so. In the ’80s and ’90s, Todd wrote, recorded, and released much of the hardest guitar instrumental music heard on television and sports videos. Having been a member of countless bands, Underwood has played with various artists such as Sly and the Family Stone bassist and shared the stage with names like Grand Funk Railroad’s Mark Farner.

Now, continuing to indulge his love of hard-edge music with a precious fondness for melody and harmony, Underwood releases new music under his name.

The target in Todd’s crosshairs is well focused: exploiting the successes obtained to date and the experience gained over the years to continue to feed that ride and drive towards notoriety, as a natural continuation of an artistic career to which he has dedicated himself for many years.

Todd’s journey began ideally around 16, when he built his home studio, fully equipped with ½-inch tape, later upgraded to ADAT. From here, he learned the finer points of guitar and voice recording, which has always represented a sort of central “vulnus” around which his style and signature developed, then expanded in favor of the “guitar-bass-vocals” magic triptych.

We had the pleasure of discovering him dressed up in the most acoustic version of him, thanks to the previous album “Reflectings Acustico,” an exquisitely organic production that highlights his songwriting and vocals. We talked about it a while ago. If you missed our piece, you can find it here: Todd Underwood // Reflectings Acustico

Coming instead to its more Rocky root, Underwood’s vision seems to be closer to the Punk of the 80s, never forgetting the aforementioned The Police, including the inevitable Beatles, and adding something more spicy that we could trace back to the Red Hot Chili Peppers.

In short, a guitar-driven perspective, but which is by no means trivial, nor is it a puppet of the acts that inspire him. Rather it is a horizon on which lapilli and “boreal” efflorescences stand out. Bold, at times animistic, Underwood’s musical outbursts culminate in the Junoesque 13-track album “Upside Down.”

The driving element of Todd’s work is an emotional pull, which flows exhausted and not lacking in bruises from a 2020. And wanting to immediately find a synthesis to clarify everything, the first metaphor in which we capitulate is the classic of the type “what it does not kill, it fortifies. “

The same title track that opens the entire album invites in no uncertain terms to this first reading. But of course, there is more.

Here Underwood is not waving yet another COVID-themed release. In the 13 tracks of him, there is the whole throbbing epic, up and down those roller coasters, which in the madness of 2020 saw him face heavy vicissitudes.

He lost his family. He lost his job for part of the year. Then he lost his dignity and pride, and despite him, he found himself on a roller coaster of pain and false hope.

So as his world is ransacked, literally turned upside down, the edges of certainty are ripped away, leaving the bony entity of one bare.

Sure it’s a hellfire, but somehow Underwood seems to have come out of it: marked, ergo re-purified, ergo elevated to new awareness. Indeed, that fire does not seem to have affected his nature and his inspiration in the least. Indeed, to listen carefully, track after track, is something that pushes him to give more and more definition and density to his focus.

We must say: What a focus! What a fire!

Listen now to "Upside Down," the latest Album by Todd Underwood, available in streaming on all major digital platforms. 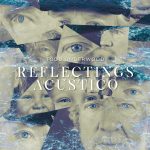 Like a wonderful rainbow, with “Reflectings Acustico” Todd Underwood traces a creative parabola with which he embraces and emphasizes the steps he has taken to build his musical career in these past years.