The latest work written by Todd Barrow is a positive omen inspired by an interview he had with MTV, where he was asked for advice for artists and bands who want to be successful in the modern music industry.

Following Todd, who commented well with “good luck,” they responded with much enthusiasm. Then after the interview, he started jotting down some thoughts and ideas for his next release.

“This was not an easy process because there are thousands of stories to tell in a country song. I decided to talk about the struggles in the model business and country music scene,” said Barrow sharing the backdrop of his new single.

Then, puzzling what’s behind the song, he landed on writing about two places that seem to be in the news a lot: “New York and Texas; to bring the picture to life with song. You will also hear a little tribute to the rock band ZZ Top out of Texas. Since the recent passing of Dusty Hill a founding member and bass player of the band. I have to say that ZZ Top has influenced my rock out the style in country music. I’m pretty stoked about this new release because it is very relatable with a message to keep going.”

So the message is stated, neat and clear: be your best and succeed at it. Don’t get stuck in a rut or stay in muddy waters, and keep things fresh with a sense of purpose.

Continue to reinvent yourself in this ever-changing culture is the keystone. And as Todd glossed with his own words: “Most of all let’s make awesome country music for generations to come!” What a truth, not just for the Country style!

Listen now to Good Luck, the latest Single by Todd Barrow, available in streaming on all major digital platforms. You can find your favorite one via toddbarrowmusic.com

To know more about Todd Barrow and his music, find and follow Todd Barrow all over the web by checking the links below: 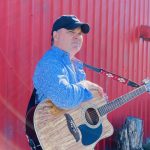 Featuring: Todd Barrow, Texan country artist who is making a name for himself in today’s music industry, heating the airwaves with the genuineness of his music. 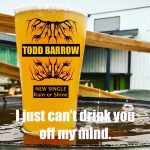 Todd Barrow has just released his latest single entitled “Rain or Shine”, a piece in which we find all his artistic identity.