No! He's the torchbearer

out now with his brand-new 10-track album

Like a lightning rod, sensor of that electrostatic fever that hovers in the air, the Canadian artist is not afraid to get shocked while he raises his banner.

Brae’s escalation continues, in a new 10-track album with a dazzling sound.

His fist is tightly closed, and he wields with fierce firmness not a weapon, not a dragon’s head, but a rolled-up comic book. One of those on retro superheroes drawn with slightly faded colors, on paper a little yellowed by time passed away.

The artwork of Pennan’s new work is almost “onomatopoeic” in tickling our imagination, bringing the visual and auditory idea: feel all the tearing force given by the gash of lightning that kindles the tip of one torch, proudly wielded by an arm sleeved in tartan fabric. 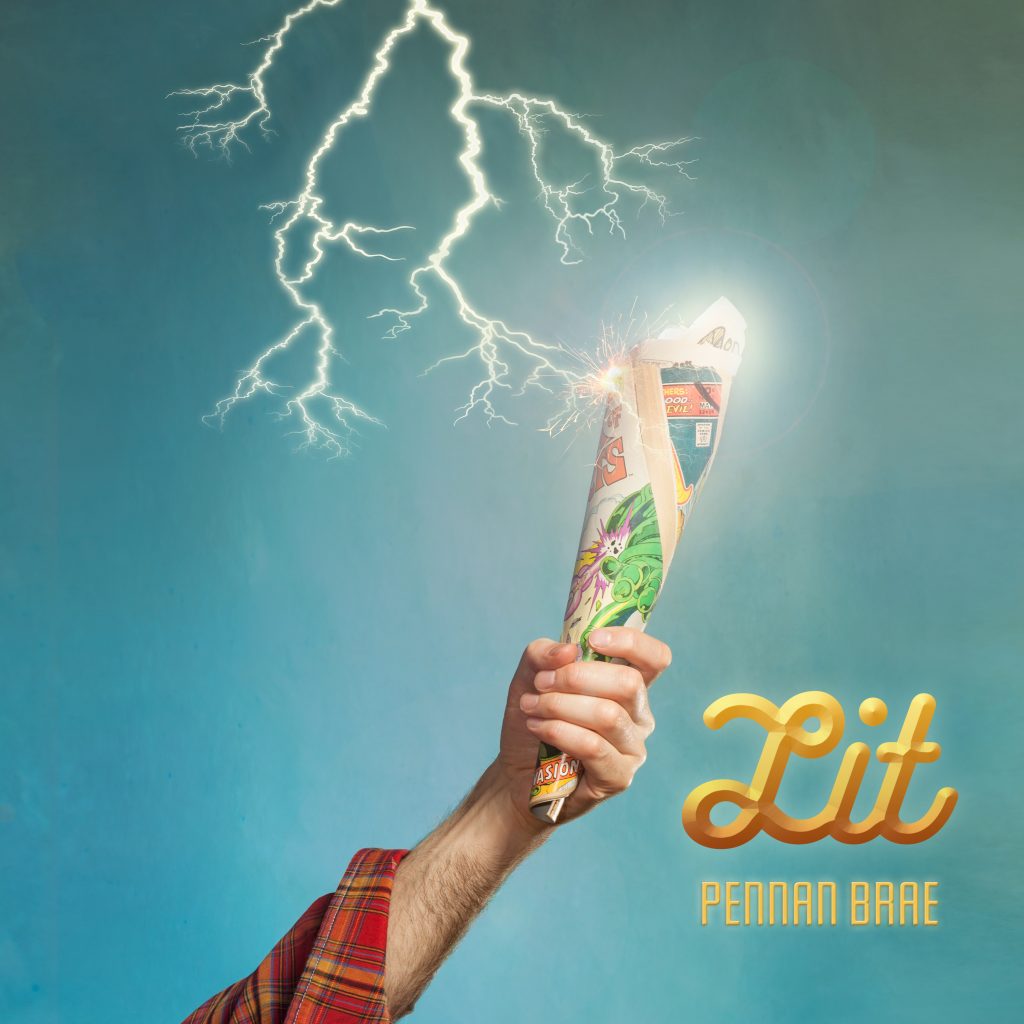 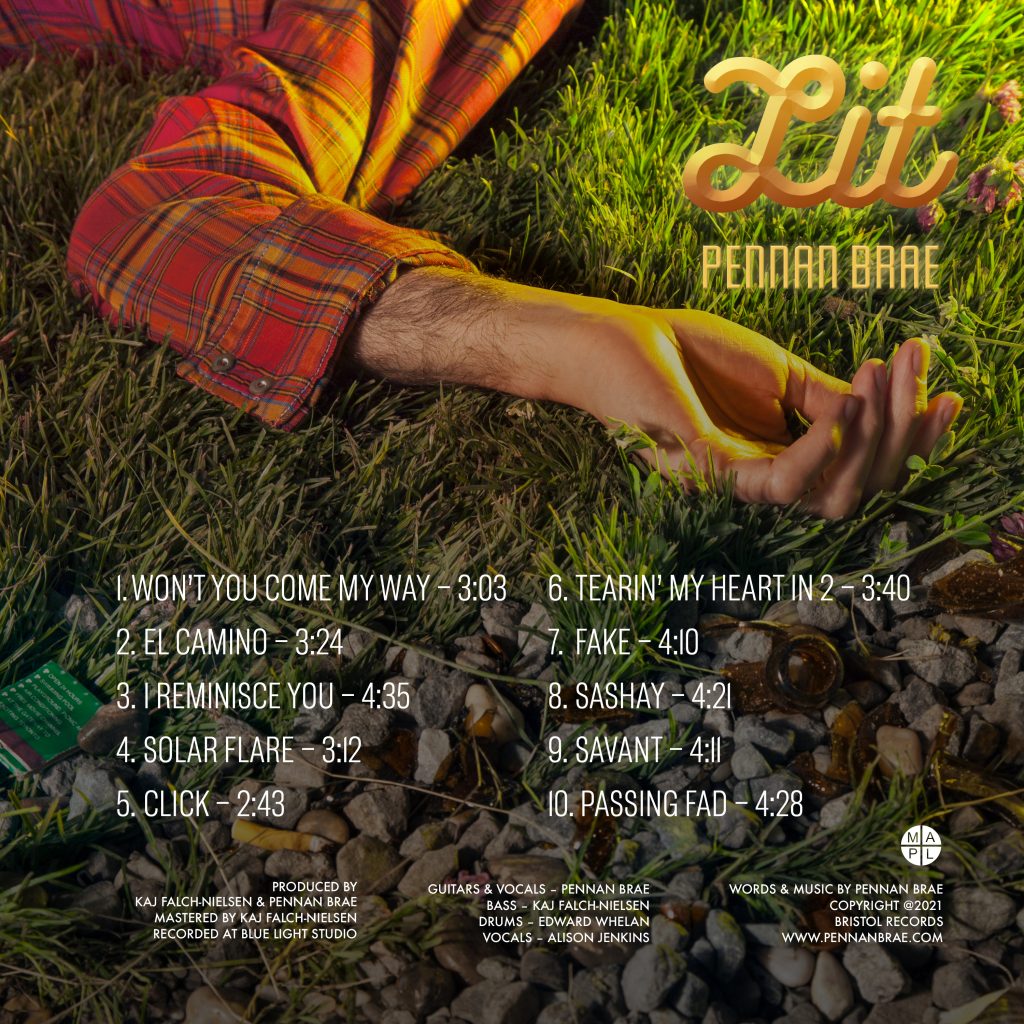 Figured this way it could appear a confusing jumble of stuff thrown in at random. But in reality, here the genius glimpse outright from the cover of “Lit.”

The iconography wisely selected by Brae is a perfect warranty seal, glued on the concept, stuck to the style, labeled at the character that we can and should expect to find within the 10 riveting tracks of this album.

So with the ease buoyancy of an ordinary passer-by, Pennan struck a match, observes its flaming head for a few seconds, and captures its fiery juice in full Rock style, suspended somewhere between the 70s and the 80s.

Obviously, the epilogue of the skit we are imagining is only the epilogue of a solar flare that Brae makes explode by carelessly throwing the lit match into a pile of suggestions and memories loaded with petrol and fireworks.

Needless to say, the bang is a continuously exploding supernova that trolls, crushes, and distorts in the background, behind Pennan who continues undaunted to insert one number after another performing his “gizmodromic” guitar riffs. 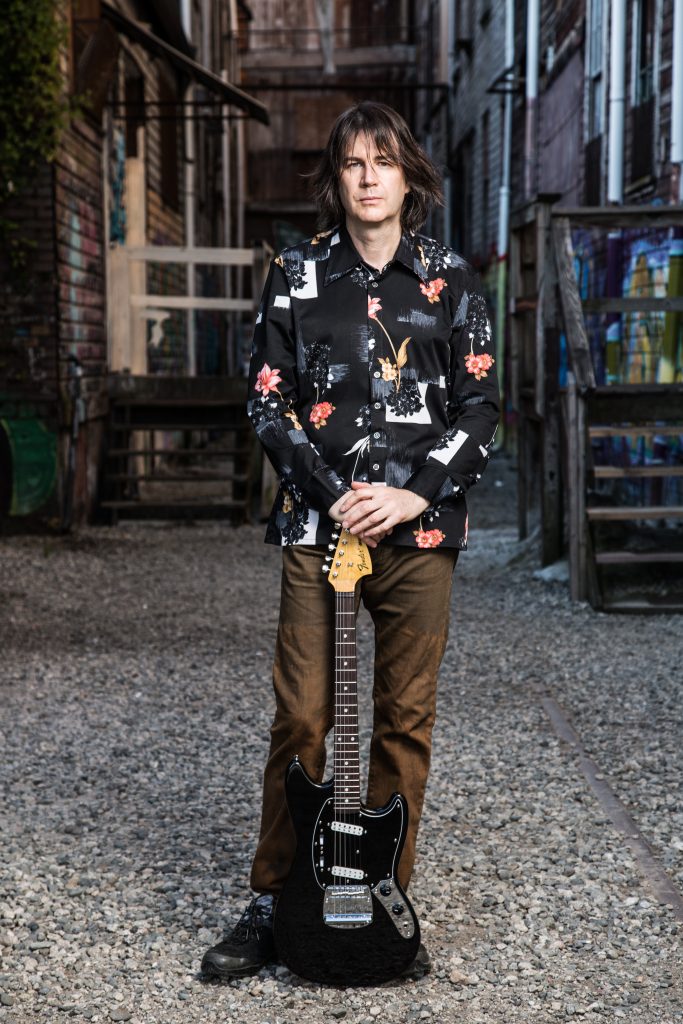 Amidst pompous learned, rusty fakes, and kid rocketeers, the light brought by the Brae thunderbolt clarifies and lays bare certain comatose mirages. And in iterating the importance of certain unbounded reveries, it suggests a different way to look at the horizon before us.

Here then is that the anxious clicking of the clock of time that passes inexorably fades into the background, while the road now appears freer, and more orderly, open and opening us to everything we can appreciate.

Recorded at Blue Light Studio with producer Kaj Falch-Nielsen, the 10 tracks of “Lit” feature Edward Whelan on drums, Kaj on bass & Alison Jenkins on background vocals. And these ring out like bells of good hope in a current frontier desolation that sees many, too many lost and confused in wanting at any cost to separate what we will be from what we were.

The present is subjected to continuous updating cycles, with ever-tighter cadences so as to give the impression that everything is deciduous, that everything is destined to unravel, leading to a general sense of the end of games and fun, in which nothing is worth more than nothing.

But it is precisely in this pallor, where even the brightest splendor seems to lose its most thrusting lust, that a “Lit” line reconnects the nerve centers. It’s a line in the shape of a lightning bolt, called Pennan Brae.

Pennan Brae is not only a prolific artist with multiple releases, but he is also a screenwriter who has signed two independent films. Being one of the most interesting acts that we are following closely in his path and in his artistic evolution, we reached Pennan for a short interview.

So before closing this new special we invite you to keep on reading and find out more about this inspired artist.

Then check out “Bullet Questions With Pennan Brae” on the Nova Music blog YouTube channel.
As a new Q&A format we recently launched, Bullet Question With aims to offer a nice and interesting glimpse of some remarkable acts, which we selected among those covered by our blog.
Check this link for more, and be sure to subscribe to our channel, to not miss the next episodes.

Hi Pennan. Happy to see you again. Thank you for taking the time for this new interview.

Thanks Gabriele for the opportunity!

It was a year that drove most indoors to seclusion. That provided more time for songwriting, so I was busy at that.  The time indoors also offered the opportunity to create a lot of music videos remotely with my creative partner Tim Cash of Far From Earth Films. Tim and I made about 15 music videos over the past year, with more on the way.  I also worked with director Rob Fitzgerald of Hip Video Productions on some creative music videos as well.

Even with 2021, you are off to a great new start. Your brand-new 10-track album “Lit” is out now. What do you expect from this new chapter?

I’ve no idea what to expect; I’m pleased with how the album turned out and I look forward to sharing it.  We finished the mixes in the last quarter of 2020; hope people might enjoy it!

Listening and watching your productions, we can feel how the 70s and 80s works more as a creative drive for your view than something like a favorite style. How is it to feel so in tune with a culture son of the last century?

It was just a simpler time and the things I grew up with.  There seems to be always a fondness for things we experienced as a child. Call it nostalgia. It was a more tangible and tactile era, and I love the music & movies of those decades.  I rarely listen to much music past the 1990s.  So I guess all these influences came out in my music and film.

Some say “old but gold.” We prefer something like “old but new.” How do you manage to bring such a refreshing vein into your productions?

Well, fortunately, I’m working with very creative people who can help bring my vision to life.  I enjoy recording at Blue Light Studio in Vancouver with producer Kaj Falch-Nielsen.  Visually, it’s Tim Cash; I always love and respect his artistic sense.  And Rob Fitzgerald also; we’ve made some nice visuals this past year.  I’ve been very fortunate to cross paths with these folks.

What was it like working with this artist roster?

It was great.  Edward Whelan is a fantastic drummer; he’s a musical drummer with wonderful musical sense.  I’m so fortunate to be recording with him.  I recall seeing Edward drum via a 20-second Instagram clip and knew immediately I wanted to record with him.  I asked Kaj, ‘Who is that guy?’, and fortunately, he was able to hook us up.  I’ve worked with Kaj Falch-Nielsen for nearly a decade as both a producer and musician. Kaj is extremely well-rounded musically, and we had a fun time laying down the bass in the studio.  And for background vocals, Alison Jenkins is the way to go; she’s just amazing.  She comes from a theatre background, so she can tap into all sorts of emotions behind the microphone and provide a wide range of performances. Just a fantastic singer.  And Blue Light Studio in Vancouver; what a great place to record.  It’s a nice space and atmosphere with lots of good people.  It’s been a great place to meet new musicians.

“Lit” offers a sound full of fun, energy, excitement. Tell the truth: how much of these sparks did you get recording this album?

I had a great time recording the album, and there were plenty of sparks.  We recorded guitars and vocals first and then added drums and bass.  There were some happy mistakes along the way.

From 2018 to 2020, you were committed to releasing 2 indie movies – “The Astronot” and “2 Below 0,” now both available to stream on Amazon Prime Video – and the accompanying soundtracks. So, what’s the big plan?

I love filmmaking and had completed 20 music videos by the start of 2018.  I sought to tell a longer story, so these films provided the opportunity to do so.  It was a great experience being on the film festival circuit and learning about this side of the arts.  It was exciting to place the songs in the film and create a soundtrack.  So I’d love to film more movies like that.  Covid-19 has stopped filming in its tracks, so I’ll have to wait until the current situation improves.  But it was a blast working with director Tim Cash on those films, and I hope to do so again.

You clearly have a comprehensive vision of what your project needs to be. It’s not just about music. It even touches the cinema. So what is the fil rouge that binds everything?

Making music videos and films is simply so much fun that it’s a difficult thing to ignore.  So I enjoy making a comprehensive package that puts forth the music and the visual.  It’s simply the joy of creating in different mediums.

No plans on the horizon to produce a new vinyl?

I’d love to print some vinyl but it comes down to budget and what I can swing.  At this point, the expense is a bit out of my range unfortunately. I did print vinyl for ‘The Astronot’ soundtrack but I haven’t been able to afford to do other albums since.

“Lit” is out now, available for streaming on all major digital platforms. The next step?

The next step is to promote and share it!  I’d like to play live when the situation improves.  I’ll be putting out music videos for each song off the album; we’ve completed 3 videos, but haven’t released them yet.  ‘Passing Fad’ will be the first release and is set to drop on Feb 2nd.  And after focusing on this release, it’ll be onto the next one hopefully!  I really appreciate Nova Music Blog’s support and sharing of ‘Lit’ and with my last album, ‘2 Below 0’; you’ve been a great support this past year.

Listen now to "Lit," the latest Album by Pennan Brae, available in streaming on all major digital platforms. You can find your favorite one via pennanbrae.com/music/

You can also discover "Lit" and Pennan Brae music by listening to our playlist NOVA ERA, a weekly rotation featuring an eclectic selection of artists covered by Nova MUSIC blog.

Oops, Pennan Brae did it again! The Canadian artist unsheathes and waves his rock ‘n’ roll rapier once again, firing the spectacular supernova “Crashland,” the lead single and lyric video off his movie soundtrack “The Astronot.”