After the debut single ‘Barcelona’, rising singer-songwriter Hydie Humbles comes back with the contemporary alternative mix of soul, pop, and R&B of ‘Hippie Camp’.

Hydie Humbles is a singer, songwriter and musician who started her journey as a solo artist in 2017, after years performing as a drummer in rock bands.

On the wake of the success of her debut single ‘Barcelona’ – we talked about it in a previous post here: – this inspired London-based artist is going to release her second work ‘Hippie Camp’, out on 10 July 2020, as part of a string of song inspired by her travels around the world that she is going to publish during the whole summer.

Mixed by Evil Genius UK, a producer duo and label in Surrey, UK, ‘Hippie Camp’ was co-written and recorded at Hermitage Works Studios, in North London. Developed on a homemade beat and harp loop, the track was built up in the studio, with live musicians dropping in to add their flavor.

About the song’s backdrop Hydie says: “Hippie Camp seems to really divide people because of its raw sound and experimental structure – some love it, some not so much. I was so pumped up with positive energy when I returned from the conscious community in Sweden, I wanted to create something to spread that same feeling of love and peace I had felt. When I got to the studio, these words pretty much just flowed out.”

Imbued with a free-flowing aura, ‘Hippie Camp’ is an original and genre-bending piece of soul, pop, and R&B vibes. Bringing in a genuine message of peace and unity, this song plays as a missive, encouraging its listeners to enjoy the present moment just as it is, with no inner resistance.

To not miss the release of ‘Hippie Camp’, out on 10 July 2020, and to find out more about Hydie Humbles and her music, find and follow Hydie all over the web by checking the links below: 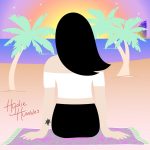