Zachary Chacon, resident in Lawndale, CA USA, is name behind the one-man-band Hollywood Video Game Kill-Bot. With a discography formed mainly by albums, among the ones with which he closed 2019 stands out ‘Gray’, a collection of 7 tracks through which the visionary modernist artist offers us one of his more histrionic alternative parentheses.

Ghostly voices from other worlds echoing through alien atmospheres moved by a piano that obsessively repeats a riff, like a broken music box: this is the very personal compositional act with which HVGKB introduces us to ‘Gray’.

The rhythmic and harmonic restructuring in which Kill-Bot accompanies us, takes on more complete features with the second track, titled ‘Amp’. Here, although he maintains the mental design of a riff that repeats indefinitely, the harmonies take fewer alternative connotations.

The dystonic drift that HVGKB is arguing reaches a sophisticated sophism with ‘Aim Higher’. The song presents a succession of attempts at accords between synths and guitars that on several occasions try, albeit in vain, to find the right harmonic tuning.

The interlude ‘You Are the Placebo’ is, as the title suggests, a placebo. Kill-Bot deceives us, exchanging the leading role of what from now will carry on the musical discourse. Now the percussion is the driving force, but the surprise comes when they return inexorably to that cycle of cyclic riff repeated obsessively, seemingly forever. 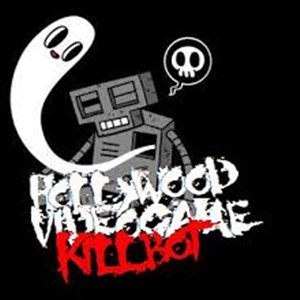 If the expectation was to have a foothold to return to a certain comfort zone, the bridge represented by ‘Damage Your Art’ is nothing more than a slide to make the smoky spectrogram of the anxiolytic ‘Flanders’ impend on us, with its disturbing synths looming on distant voices of conscience.

The dark and dramatic vision edited by HVGKB with ‘Gray’ finds its perfect ending and its maximum sum in the last track, ‘The Hipster That Killed Music’. Here, a sense of total absence of hope for what is to come will empty us, to make room for the instrumental missal prophesied by the synthetic organs that face off on strained notes from distorted guitars.

Undoubtedly among the most alternative and visionary works that we have recently discovered, ‘Gray’ carries a musical message of complex workmanship and legibility, one that seems to find its best expressiveness in its distance from the canon.

Listen now to ‘Gray’, the album by Hollywood Video Game Kill-Bot, available on Spotify and follow him on Facebook to find out more about his music.