amazes with her alternative and unique eclecticism, surprising us once again with the new single Lonely Place To Be

Certain songs are born already feeling destined to endure the passage of time. Persistent and pervasive, those that best succeed at this are precisely the ones that were not necessarily created with this specific purpose, but rather dug deep into a theme or topic, capturing all its essence and elevating it to another level, giving the listeners the fullness of all its founding and characterizing elements.

Being able to excel in this creative process is undoubtedly one of the most difficult challenges an artist can attempt today. In this contemporary era, the creative arts find it difficult to bring something truly new to the masses. The difficulty doesn’t lie so much in the talent or skills that the artist has, but in being able to develop into music something that has structure, meaning and purpose, without however sounding trite and already heard hundreds of times in the last 50 years. Let’s round the number to simplify the argument, even if, truth be told, we ought to go much further back. The crux of the matter is that the general consensus is that by now all that could be invented already has been. Specifically, the thesis of the majority claims that all the ways in which the arts can embody feelings, thoughts, narrative structures, and reflective explanations have already been codified and decoded.

However, sometimes the exception comes that “breaks” the rule. The viral theme of the moment, even in the world of music, is undoubtedly the pandemic scourge. We’re seeing a plethora of songs revolving around the most viral words of today. And they almost always fail miserably in their artificial attempt to stick those words into their lyrics.

Fortunately, however, there are still some artists who choose to approach the issue from a different point of view. Rather than starting from the topic – the virus, war, violence against women, etc. – they tackle the results, the effects that these things have on themselves and on the people who live and suffer them.

Ekat Bork is one of them, and with her ‘Lonely Place To Be’ she brings us one of the most beautiful songs we have had the pleasure of listening to as part of that multitude of tracks about the pandemic. What differentiates Ekat’s song from many others is the fact that Ekat’s is not about the virus. At least not directly.

In fact, ‘Lonely Place To Be’ is a song full of the sense of affliction brought by the forced “isolationism” of the lockdown. We drag ourselves from one room to the other of our homes, our pajamas and jumpsuits having become a sort of striped prison uniform of our time. And it’s precisely the lockdown of 2020 that made us realize how important and priceless it is to be able to live our lives freely, out of any segregation, away from that sort of civilized prison regime in which we found ourselves.

Immersive and poignant, ‘Lonely Place To Be’ is a work of unparalleled musicianship, exquisitely minimal and at the same time imbued with an expressive depth that comes to touch us in the most hidden and recondite parts of our feelings, confirming once again the incredible talent that this artist showcase with each release. The song, which boasts a commendable production quality, presents itself with a horizontal development that can be divided into three real acts, pigeonholed between an atmospheric intro and an outro. Gloomy and gripped by a sense of constraint appropriate to its theme, the track offers a final outlet of hope, made of such splendor that it perfectly seals all the prose Ekat developed.

With such an act of admirable beauty as her ‘Lonely Place To Be’, Ekat Bork continues to place herself in her own, separate category, while at the same time allowing everyone to reach and grasp the vastness and depth of her eclectic and alternative creativity, gifting effortlessly a wonderful glimpse of her elegant, sophisticated, and alternative style.

Iconic business card with which the artist introduces her upcoming self-titled album ‘EKAT’, the release of ‘Lonely Place To Be’ is accompanied by an official video, available on Ekat Bork’s Youtube channel, which sees the artist performing as a protagonist in a series of black and white shots, expressing the sense of affliction and discouragement proper to the song theme, further emphasizing the delivery of the musical message.

Listen now to Ekat Bork’s ‘Lonely Place To Be’ and find out more about Ekat and her music, checking the links below: 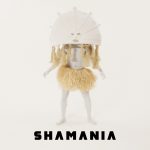 Stateless and ancestral, introducing her new album ‘EKAT’, Ekat Bork amazes and enthralls with the single ‘Shamania’ and its accompanying video.