Thanks also to his latest album “Blue Faces”, former member of the rap crew Y.B.E. (Young Black Entrepreneurs) DopeAMean has cut his teeth over the years by recording music, playing live and selling CDs on the street.

Now engaged in pursuing his solo career, DopeAMean is a wiser and more mature artist, having lived on the fringes of the world, in the darker folds of some of its darkest and saddest places. And it is this outlook on life, made of optimism and hope for the future mixed with an honest awareness of reality, which distinguishes “Blue Faces”.

Alongside a more classical rap approach, DopeAMean brings typical trap and R&B traits, setting up mixes that derive from all these styles, playing on enthralling rhythms and smooth grooves. Above all always stands out  DopeAMean’s lyricism, which turns out to be eloquently honest and starkly aggressive throughout the album, from the first to the last track.

DopeAMean was available to answer some questions. Read on to learn more about this innovative artist.

Hi DopeAMean. Thanks for joining us.

Your music seems to be particularly marked by a very peculiar personal signature. Where does all this come from?
Just a lot of things that I’ve been through in the past. When I was younger I live in a place we’re I couldn’t express myself freely, and writing just became my way of doing that. When I decided to become a rapper, I tried to keep that same edgy vibe in my music. Likewise, lyrically I just continue trying to push the bar forward for the next generation.
How much of what you just mentioned brought you to “Blue Faces”?
A lot! “Blue Faces” was the focal point of my album. Even though it’s just one song in contrast to the album, I wanted it to be able to stand on its own outside of the album. It explains where I’ve been to hopefully help listener see where I’m going. A lot of “Blue Faces” is me having fun with free self expression.
Your artistic vision seems to be all projected forward. “Innovation” and “looking to the future” seem to be the pillars of your artistic endeavor. What is the meaning and purpose behind this?
The meaning of my foresight into the future is to get people away from their being stuck in the past. There are always good thing coming to us in life and we have to prepare for where we wanna be. This album let’s my fans know here, I’m ready to move forward and what’s to come is going to be better then where we came from. All that and the fact that I reach to make my music timeless in its existence.
Let’s remain a bit more on a concept that is dear to you: innovation. What do you need today to be “innovative” in music?
Vision to see new paths, leadership to follow those paths wherever they lead, and Resilience to keep going for it even if what you tried doesn’t work. Don’t go your way, sometimes you have to be able to step outside of yourself and connect with the stories we all have but nobody seems to tell. We have to learn that there are no limitations and believe that we can continue to push forward the culture. To me the best innovations are rooted in free expression.
After the recent release of “Blue Faces”, do you have anything else already in the works?
Yes, by the beginning of the year I hope to be dropping my mixtape Every-Thing Dope and maybe a few singles between now and then. Also I will be starting on my self titled album DopeAMean.
Where can the curious and fans listen to your music and find out more about you?

Apple Music, iTunes, Spotify, Tidal, Amazon, Deezer, SoundCloud, and various other platforms. Info about me can be found on my Linktree at Linktr.ee/selfmadeceowade.

Listen now to “Blue Faces“, the latest album from DopeAMean, which is available on Distrokid hyperfollow link [ here ] and all the major digital platforms. Too keep in touch with this talented artist, check his socials: Facebook [ here ] and Twitter [ here ]. 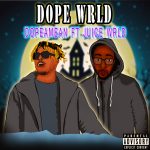