Bruce Cohen is a veteran recording artist with over 40 years of experience and dozens of releases, published both as a soloist, and as a member of the duo The Reds. It was 1977 when Cohen and Rick Shaffer gave birth to the first album by The Reds, which was certainly as important as the release, in 2009, of his first solo project, ‘One BC.’

Cohen’s long career could be labeled as an excursion of electronic music, very close to the minimalist one of the German scene, including soundtracks for cinema. However, everything we have just said sounds restrictive, especially considering his latest release, the 10-track album Six BC.

Of course, Six BC is part of the musical excursion that Cohen has matured over all these years. But what he’s offering with this latest release is something that goes far beyond this. Starting from an abundant fusion of ambient, funk, grooves, experimental, and percussion, his creative act gives life to a work that, we find, has many elements in common with the artistic movement of Surrealism.

The first connection is given by the entire musical delivery of the album: if on one hand it keeps us deeply rooted to the ground, with grounding low and sub-bass frequencies, on the other, it opens a boundless perspective on the dimension of dream. Putting in relation principles of logic – the automatic – with a sense of freedom and expression – the dreamlike – what Cohen creates is a formidable impulse, aimed at overcoming the split between reality and the oneiric world.

Every single track could be understood as a single volume of a large and voluminous encyclopedia. There is an expressive and extraverted density in every single song of this album, to the point we could continue to listen to each for weeks, analyzing and decoding every single drop of the Six BC nectar.

Of course, here, the experimental, alternative, and avant-garde imprinting is particularly strong and distinctive, most likely making the listening not suitable for everyone. But what in the first instance could leave most people bewildered contains within itself a great treasure of communicativeness.

At this point in the article, it seems almost demeaning to continue to define Six BC as an album. Rather, it is something that, by definition, we put in a category of its own, with which Cohen dictates an otherworldly new line that demands only to be discovered.

Download a FREE mp3 of Under The Nova on Soundcloud.

Listen now to Bruce Cohen's Six BC, and find out more about him and his music, checking the links below: 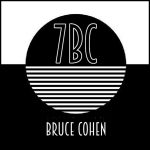 A contrite apotheosis of what led the veteran musician Bruce Cohen to create, the lead track Funkasaurus is the internal pinnacle taken from his recent album 7 BC.