Swiss pianist and songwriter Adamante is back under the spotlight with a new single full of his colorful, passionate, and radiant style.

We had the pleasure of meeting him thanks to the release of his previous single titled ‘A Perfect Day’, a solar and uplifting song we talked about a few months ago. In case you missed it, you can find our piece here: Amadante // A Perfect Day

Now Amadante is back in the spotlight, satisfying us with a new number exquisitely chiseled and keyed in the wake of his creative signature.

We are talking about ‘Blue Green Yellow’, a single track with which Amadante does not betray expectations and further embellishes his stylistic perspective.

Wrapped in an airy and liberating perspective, which inspires us to imagine a colorful skyline, he paints a luminous, loving, and engaging scenography with crystalline positivity.

Pure and genuine, the musical delivery that Amadante offers us with his ‘Blue Green Yellow’ is an easy-to-read empathic effusion. However, the linearity around which the arrangement develops leaves ample space for those chromatisms that the Swiss pianist knows how to manipulate with affable mastery.

Step by step, accompanying us up a sort of ascending staircase, tangible as it is ethereal, Amadante veers between the shades of blue, green, and yellow.

Between a dip in the sea and a flick towards the sky, he moves above and below that skyline, which separates and unites two worlds that are as different as they are close.

This is a line that is a unifying split, around which a multitude of nuances is generated, broad and deep as the feeling that exists between two people, who love each other, who desire each other.

But Adamante’s is an excursus that transliterates even the most carnal part of the sentiment of love. Lyrics such as “When your eyes are blue-yellow, it makes me hungry for you. Dark blue when you’re feeling the blues” are a material and palpable hook. Impossible not to imagine the two lovers involved in a passionate embrace between the sheets.

Then, immediately afterward, here comes a heady wriggle, silhouetting our imagination towards new horizons that open up more and more: “We’re walking barefoot in the sand, along the shore at dusk, hand in hand, like a shooting star, you’re my unexpected. A blooming desire to be protected.”

These are just two parentheses of nine verses, which in a matter of seconds, encapsulate two cornerstones of the most genuine love, physical attraction, and the desire for protection, which indicate how Amadante is a sensitive artist, as well as a fabulous composer and songwriter.

A brilliant result, shining with beauty and freshness, ‘Blue Green Yellow’ is a safe addition to anyone’s daily playlist. 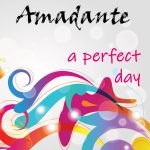 ‘A Perfect Day’ is a solar and uplifting single, in which we find all the creative positivity that guides Amadante as he writes his music.

Listen now to ‘Blue Green Yellow’, the latest single by Amadante, available for streaming on Spotify.

To know more about Amadante and his music, find and follow him all over the web by checking the links below:

Also, you can discover ‘Blue Green Yellow’ on our playlist NOVA ERA, weekly rotation featuring all the artists covered by Nova MUSIC blog.